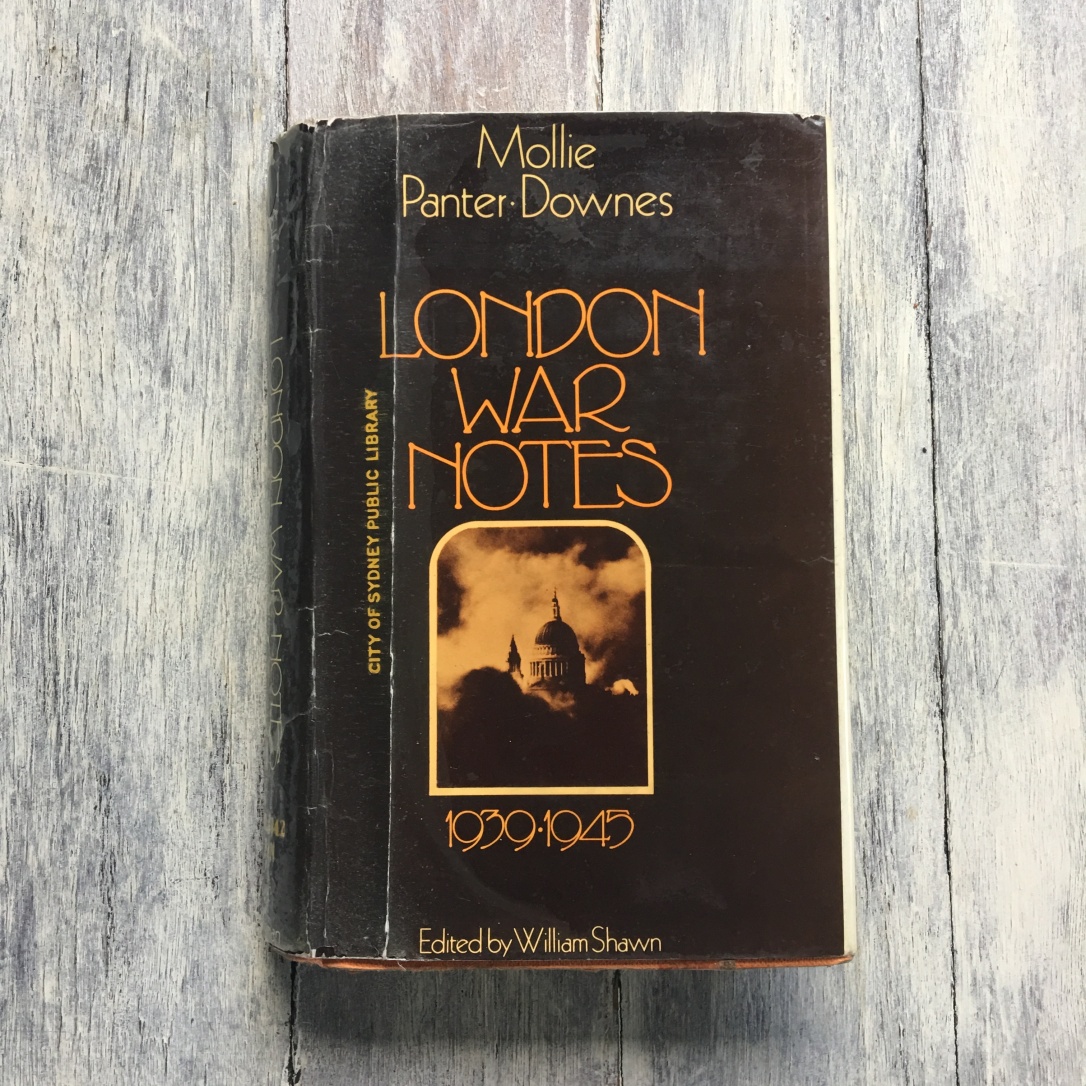 Let’s get one thing out of the way first: school life must have been hell for Mollie Panter-Downes. The name is quite extraordinary and yet somehow perfectly of its time – catch anyone saddling a defenceless babe with such a hyphenate now.

Born in London in 1906, Panter-Downes (no, I can’t do it; she’s P-D from now on) was a novelist whose first book, written when she was just 16, earned great acclaim. With apparently equal – and equally irritating – ease, she soon began selling poems and stories to the New Yorker, and come the Second World War in 1939, her editor there astutely commissioned her to write a series of Letters from London that continued until the end of the war in 1945. These letters are collected in London War Notes 1939-1945.

Despite the book’s subject, I’d for some reason expected a lighthearted look at London in wartime. Partly it’s that terribly unfortunate name of hers, partly because I associate P-D with Stella Gibbons and Nancy Mitford for rapier-pointed wit – and partly, honestly, it’s the legacy of Dad’s Army, which unrelentingly portrayed WW2’s home front as full of bumbling country clots and self-important retired colonels having jolly japes.

At the beginning, the letters lived up to my expectations; there’s the snortingly brilliant evocation of the village of Mugbourne, overrun by evacuees: “Cockney voices shrilled over the village green, where mothers sat listlessly in the sunshine, pining for the fleshpots of Battersea”. The first air-raid warning coincides with the first hunting morning of the year: “Quite unmoved by the warning, old Squire and his merry men continued to tootle and crash about happily in the copses. It was felt to be an excellent gesture which would certainly infuriate Hitler if he knew.” Others react more obediently: “Miss Chubb, one of our sub-wardens, found that she had not yet been provided with the tin hat promised by a benevolent government for such a contingency. Nothing daunted, she donned an aluminium pudding basin, which fitted to a nicety”. Further up the social scale, and rather less prepared, is Miss Sybil Molyneux-Thring, who has been appointed to drive an ambulance but is still in bed when the sirens go off. “She struggled out of her night attire and into most of her uniform as she ran downstairs, completing her toilet on the last lap across the stableyard, where Parker, the chauffeur, had her car waiting with the engine already running. Handing him her nightdress, Miss Molyneux-Thring hopped in blithely and drove off in a scatter of gravel, leaving Parker clasping a few yards of peach-coloured chiffon to his bosom and feeling that this was war all right.”

However, that blithe spirit (Coward’s popularity was at its height in the war years) soon darkens.

It’s sobering to realise that the enduring image of the cheerful, stoical British populace is far from accurate. “Everyone is slightly fed up with something or other: with the Ministry of Information, which doesn’t inform; with the British Broadcasting Corporation, which is accused of being depressing and – worse – boring…” So much for the glory days of the BBC, which comes in later for a dose of scorn for its incessant programming, during moments of crisis when nerves are already frayed to their limits, of Gilbert and Sullivan. However, “The Ministry of Information comes off worst with everybody. The man in the street feels, rather naturally, that he is paying plenty for this war, that he is entitled to know what is happening…” Fake news – or no news – is nothing unique to our era. And it’s not just general grumbling about the war; the coal miners’ strike towards the end of the war hits a discordant note in what’s generally assumed to have been a British population singing a harmonic chorus in patriotic support of the government. In fact, according to P-D, “the British people”, a group that’s always been anything but homogeneous, evinced all the many and varied characteristics during the war that they do today, from stubborn obstinacy (many could not be convinced to evacuate themselves and their children from London, even during the Blitz) to grumbling acquiescence to authority.

The book raises questions about how one’s own generation would react in such a circumstance. It’s tempting to think that in these days of material abundance and individualism, most would refuse to fight, but in the early 20th century, too, people’s patriotism was unpredictable. After all, an Oxford Union debate just a few years prior to the war, in 1933, carried the motion that “this House will in no circumstances fight for its King and Country.” It’s safe to assume most of those young pacifists did end up fighting, and perhaps dying, for King and Country.

Nevertheless, some profound differences in social attitudes between then and now are evident. Despite P-D’s blistering intelligence and finely honed observational skills, she is as much subject to the customs of her time as the rest of us. Constant references to ‘housewives’, to whose lot falls sole responsibility for managing food rationing and clothing coupons, stand out to a modern ear. P-D’s personal opinions, however, remain for the most part mysterious. She’s self-effacing, rarely using the first person singular and almost never recounting her own experiences or emotions. One of her most impressive achievements in this book is her regal stance of journalistically impartial observer, maintained steadfastly throughout the war.

Interruptions to the even tenor of everyday life, small and large, are inevitable in war, but it’s arresting to hear them enumerated: everything from being unable to read on the train due to the blackout regulations to being rendered instantly homeless after a bombing raid. The immense exhaustion of Londoners during the endless night-time air raids during the Blitz is movingly evoked. Tiny details bring alive the experience – and unsettlingly, even in the 1940s the unreality of it all raised comparisons to a Hollywood movie.

The book sags, as did public morale, during the long middle years of the war, but picks up as it rattles towards what everyone was aware would be its conclusion. D Day, however, fools everyone by being just another day: “What they definitely hadn’t expected was that the greatest day of our times would be just the same old London day, with men and women going to the office, queuing up for fish, getting haircuts, and scrambling for lunch.” Even the liberation of Paris was taken quietly, P-D reports, although the news “made Londoners feel as though they were waking up from a long and horrible dream and returning to a sanity so overwhelmingly good that it had to be taken slowly.” But as spring – and V-Day ­– approaches, the impression is “of a city struggling toward a gaiety in which it still hardly dares believe”. When it finally comes, it is with the atmosphere of a “vast, happy village fete as people wandered about, sat, sang and slept against a summer background of trees, grass, flowers and water.” It’s a glorious picture of unexpectedly rural bliss amid the devastation of a city that had suffered so much – and could now breathe, rejoice, and begin to build a new world.

View all posts by Hannah James